The provenance of LDS section 132 is sometimes criticized by those who believe Joseph Smith was a monogamist. Available manuscript data provides a credible historical background for the document that is today published in the LDS Doctrine and Covenants. William Clayton recorded in his journal that he wrote the original revelation on July 12, 1843 as it was dictated to him by the Prophet:

This A.M, I wrote a Revelation consisting of 10 pages on the order of the priesthood, showing the designs in Moses, Abraham, David and Solomon having many wives and concubines &c. After it was wrote Presidents Joseph and Hyrum presented it and read it to E[mma] who said she did not believe a word of it and appeared very rebellious.[1]

Then one or two days later, Newell K. Whitney requested permission to have a copy made.[2] Joseph C. Kingsbury described the copying process in 1886:

Bishop Newel K. Whitney handed me the Revelation… the day [after] it was written or the day following and stating what it was asked me to make a copy of it. I did so, and then read my copy of it to Bishop Whitney, who compared it with the original to which he held in his hand while I read to him. When I had finished reading, Bishop Whitney pronounced the copy correct and Hyrum Smith came into the room at the time to fetch the original. Bishop Whitney handed it to him. I will also state that this copy, as also the original are identically the same as published in the present edition [1876] of the Book of Doctrine and Covenants.[3]

Clayton later affirmed that the Kingsbury manuscript was an exact copy:

Towards evening Bishop Newel K. Whitney asked Joseph if he bad any objections to his taking a copy of the revelation; Joseph replied that be had not, and handed it to him. It was carefully copied the following day by Joseph C. Kingsbury . . . The copy made by Joseph C. Kingsbury is a true and correct copy of the original in every respect. The copy was carefully preserved by Bishop Whitney. (Andrew Jenson, “Plural Marriage,” Historical Record 6 (July 1887): 226.)

Sometime thereafter, Willard Richards made a copy of the Kingsbury manuscript.

The Richards and Kingsbury copies can be viewed here.

The existence of the Kingsbury copy was fortunate because the original Clayton document was destroyed within weeks of its creation.[4]

In the months following its being committed to paper, multiple Nauvooans learned about the revelation and its contents. William Law reported in the Nauvoo Expositor published June 7, 1844:

I hereby certify that Hyrum Smith did, (in his office,) read to me a certain written document, which he said was a revelation from God, he said that he was with Joseph when it was received. He afterwards gave me the document to read, and I took it to my house, and read it, and showed it to my wife, and returned it next day. the revelation (so called) authorized certain men to have more wives than one at a time, in this world and in the world to come.[5]

Jane Law signed a similar affidavit.[6] Others left records referring to the revelation with many saying they either handled it or heard it read to them. Mercy Rachel Thompson stated that she was privileged to keep the written revelation "some four or five days. Something like that."[7] Lucy Walker testified that she saw the revelation "at the Nauvoo Mansion" where she was living.[8]

Several documents affirm that the revelation was read to the Nauvoo High Council. One member, David Fullmer described what happened: "Dunbar Wilson made inquiry in relation to the subject of plurality of wives, as there were rumors about respecting it, and he was satisfied there was something in those rumors, and he wanted to know what it was. Upon which Hyrum Smith stepped across the road to his residence, and soon returned bringing with him a copy of the revelation on celestial marriage given to Joseph Smith July 12, 1843, and read the same to the High Council, and bore testimony to its truth."[9] Seven other Nauvoo High Councilors and stake leaders, James Allred, Thomas Grover, William Huntington, Aaron Johnson, Leonard Soby, and Austin Cowles, left similar records.[10] 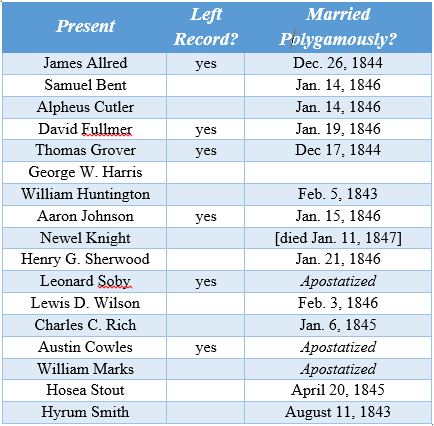 Another witness of the revelation's existence is Cyrus Wheelock who recounted how Joseph Smith "had that revelation read to a group of three or four or five together" by his clerk.[11] He added: "there was a few of us in the woods, getting out of the way and we were talking and I heard about it."[12] Others who recorded similar testimony were John Hawley, Franklin D. Richards, Ebenezer Robinson, James Leithead, Charles Smith, Mary Ann West, John Taylor, Jane Snyder Richards, and Charles Lambert.[13]

Apostle George A. Smith reported in 1871: "In 1843 the law on celestial marriage was written, but not published, and was known only to perhaps one or two hundred persons."[14] The quantity of testimonies from both believers and unbelievers regarding a revelation dictated by Joseph Smith in the summer of 1843 is important evidence that a document dealing with polygamy then existed.

Sunday, the 14th [March 1847], my husband [Horace Whitney] penned in his journal: "By father's request I went and copied an important document, which took me the greater part of the day and into the night."[16] The revelation on plural marriage was the "document" referred to, the bishop having the only one in existence, which he afterwards gave to President Young, retaining a copy.[17]

If emendations were made by Brigham Young, they would have occurred after he took possession of the document in March 1847.

Two copies in the handwriting of Horace Whitney are found:

The second is incomplete:

The existence of these copies of the revelation and the widespread knowledge of the revelation would have made successfully altering it more difficult. Success would have required a widespread intrigue involving many individuals. Kingsbury would have needed to collaborate by penning an altered (or new) revelation as directed by Brigham Young because Section 132 is a transcription of his manuscript and shows no sign of editing. (See video above of Kingsbury manuscript.)

While many Nauvoo polygamists may not have remembered details of the revelation, many other members were still alive who were familiar enough with its message to detect alterations.

Contemporaneous evidence corroborates some details in the Kingsbury copy. The testimonies of William and Jane Law as published in the Nauvoo Expositor, that the original revelation "authorized certain men to have more wives than one at a time, in this world and in the world to come,"[18] dovetail with Law's later recollections.

When asked in 1887, "What do you remember about Emma's relations to the revelation on celestial marriage?" Law replied: "Well, I told you that she used to complain to me about Joseph's escapades whenever she met me on the street. She spoke repeatedly about that pretended revelation. She said once: 'The revelation says I must submit or be destroyed. Well, I guess I have to submit.'"[19]

Proponents of the altered revelation theory must also confront the question of why Brigham would have included verses 51-66 that deal with personal issues confronting the Prophet and his wife over plural marriage.

The sometimes confusing narrative in those verses documents Emma's awareness and a struggle between her and Joseph that fits their known marital tensions present in the summer of 1843.

It seems Brigham Young had no need to frame Joseph Smith as the initiator of the practice or the revelation. Multiple voices, early and late, friendly and unfriendly, verify Joseph as the originator.

[2] Willard Richards made a separate private copy of the Kingsbury copy sometime prior to November of 1843. (Robert J. Woodford, "The Historical Development of the Doctrine and Covenants." Ph.D. diss., Brigham Young University, 1974, 1460, table 110. Available at MormonPolygamyDocument.org link JS0829. To view both copies, see (accessed December 18, 2016) https://dcms.lds.org/delivery/DeliveryManagerServlet?dps_pid=IE537526.) Whether Brigham Young was aware of this copy is unknown.